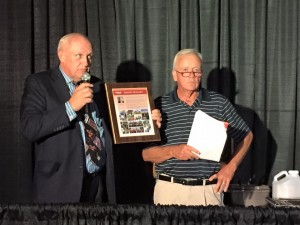 We are very proud to have been selected the best Arena Polo Club in the U.S. 2013 & 2014 by Polo America as well as best Polo School in the U.S.! Please visit www.poloamerica.com. 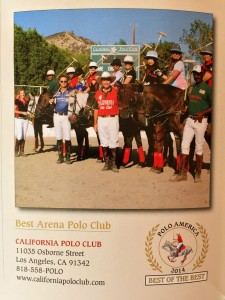 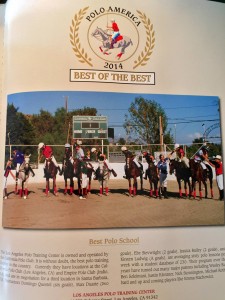 Please email us at polo@californiapoloclub.com for information and costs of lessons and activities.

The finals of the 2011 United States Arena Championship were held at the California Polo Club in Los Angeles, CA.  The tournament  featured teams led by 7-goaler Billy Sheldon and 6-goaler Domingo Questel.  This year, however, it was the father-son combination of Domingo and Manny Questel who took home the silver for the California Polo Club on the strength of a nail-biting 11-10 contest that was in question until the final seconds of the last chukker.

This year it was neither Billy Sheldon nor Domingo Questel that put up the big numbers as Manny Questal scored nine times in the championship event.

California Polo Club struck first with a goal from Manny Questel, but Thomson-Reuters answered with a pair of goals from Manny Rodriguez.  Manny Questel closed out the first chukker scoring with his second goal on the day for a 2-2 tie.

“It was an incredibly physical game,” said actor Grainger Hines, who was part of a standing only crowd that included USPA Circuit Governor Denny Geiler, producer Michael Butler and actress Stephanie Powers.

“There was nothing dirty about the play,” said Hines, a veteran player himself, “but it was very physical.”

Thomson-Reuters regrouped and took control of the second chukker, scoring three consecutive goals (two from Billy Sheldon and one from
Rodriguez) for a 5-2 lead.  The California Polo Club bounced back with three straight goals of their own as
Manny Questel evened the score at 5-5 to end the first half.

“The strategy we went into the game with was to take out their best player,” said Domingo Questel.  “Although Ashton (Wolf) lined up at the
Number 1 position, his sole job was to cover Billy (Sheldon),” he added.

“There wasn’t an uncontested shot taken in the whole game,” said Billy Sheldon.  “Any time someone looked like they were going to break loose, an opposing player appeared right alongside of them.”

Cary Burch’s first goal of the game for Thomson-Reuters leveled the score at 8-8 for the fifth tie of the game in the early going of the final period of the game, but scores from Wolf and Manny Questel gave the California Polo Club a two goal, 10-8 lead. Burch cut the lead to a single goal, 10-9, with his second goal of the chukker, and another goal from Sheldon had it deadlocked at 10-10 with less than two minutes left to play.

Sheldon’s third goal of the game had the score at 10-10 with time running out.  A penalty against Thomson-Reuters put Manny Questel at the line.

“I hit the ball to the right on the penalty shot and then buried it into the goal from midfield,” said Manny Questel.

Initially scored as a two-point shot, Referee Vicky Owens overruled the call, leaving the California Polo Club in front by a single goal with 1:20 left in regulation time.

Manny Questel received MVP honors for his explosive offensive impact on the game while Albert, owned by Poway Interscholastic Polo and played by Billy Sheldon was honored as Best Playing Pony.

USPA Governor-at-Large, Russ Sheldon (father of Billy Sheldon) raved about the organization and production of the tournament by the
California Polo Club.

“I’ve been to a lot of different polo clubs in my life and I will have to say that the efforts and presentation made by the California Polo Club should be heralded by the United States Polo Association as a model for other clubs to strive for.”

The Gladiators charged out into the arena and put up seven unanswered goals in the opening chukker, sending a shell-shocked Urban Dog team out of the arena after the first chukker in a 7-0 hole.

Urban dog managed a couple of goals in the second chukker but trailed 12-2 at the end of the first half as the Gladiators ran all over
them.

It was 14-6 after three chukkers with Darquea scoring at will for the Gladiators.   Urban Dog managed two more goals in the final period while Darquea scored his thirteenth and fourteenth goals of the match.  Oles chipped in his second score as the Gladiators rode off with the 14-8 win.